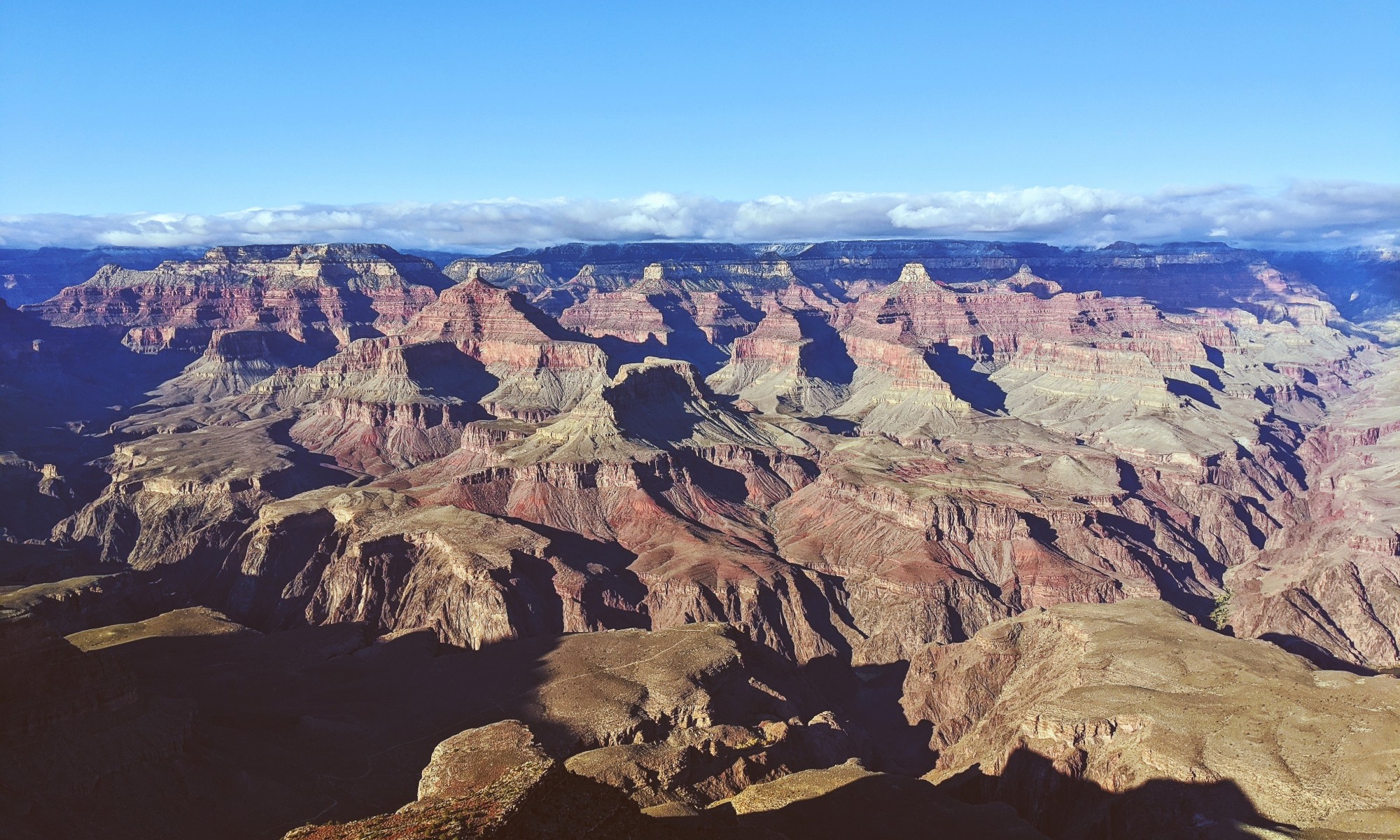 I’d like to open this post with a disclaimer: you should spend more than one day at the Grand Canyon.

There are so many things to do and to see, way more than you could ever manage to shove into six to ten hours of daylight. Hiking trails, mule rides, camping areas down inside the canyon itself; the list is as expansive as several miles-long ruts in the ground formed over several millennia.

If, however, you were like me and were chilling in Vegas for a week and had a soul-scouring need to see the Grand Canyon RIGHT NOW there’s NO TIME you HAVE TO and you only have ONE DAY to do it, then by all means.

The Grand Canyon is a go-to bucket list item.

The drive from Vegas to the South Rim of the Canyon is daunting. It takes four hours to travel from the dirtiest, most electric, most human city of humanity to one of America’s most beautiful and nature-infused parks.

(In Vegas, I saw several women dressed up as peacocks. At the Grand Canyon, I saw a freaking ELK.

I do not have pictures of either of these things, although I sorely wish I did. Their feathers were lovely.)

Anyway, back to the point. Don’t let the drive daunt you. The drive itself is a veritable tour of our nation’s beauty. The road winds through mountains and hills studded with cacti and flowering bushes. In the distance, snow-capped peaks push into the clouds, wreathed in fog.

Approximately thirty-eight minutes into your drive from Vegas to the Grand Canyon (if you leave exactly now, when I used Maps to look up how long it takes) you can pull over and use some really nice rest-stop facilities.

And oh, hey. There just happens to be a cool dam there, too.

The Hoover Dam wasn’t something I’d ever considered a must-see, but my boyfriend seemed really excited about it and it was on the way and I had to pee already, so out of the car and into the cold we went.

It was worth it.

One of the highlights of the trip was stumbling upon the Mike O’Callaghan–Pat Tillman Memorial Bridge.

The bridge itself is a piece of art; a delicate arch that straddles the Colorado River between Arizona and Nevada. Along the stairs and ramps that lead up to the bridge are several placards detailing the history of both the bridge and the dam, if you’re into facts.

The view from the bridge is a real stunner. You can look down, down, down into the sliver of river that seeps from the dam, and look across to a bank of mountains and the pool that is Lake Mead, which happens to be the largest reservoir in the U.S.

There is also a visitor’s center and guided tours that range from $12 to $30, depending on the length of the tour and the age of the person taking it. We were downwind of one and it seemed to be very educational.

We took enough pics to satisfy our FOMO and back into the car we went, winding our slow and sleepy way onward to the Main Attraction.

Entering the National Park was a very pleasant experience. The small town of Tusayan, Arizona is about a ten minute drive from the park entrance, so we stopped there to grab a bite to eat before heading in. I would definitely recommend stopping in the town, or even staying in a hotel there if roughing it in the park isn’t your style.

A few minutes from Tusayan there’s a gatehouse. There we were greeted by a park employee who took our money in exchange for maps, advice, and seven days of park access.

His advice was sound; we’d decided to utilize the free shuttles to get us from point to point since we only had a few hours of sunlight left. He advised we walk instead, and he was right. The walking is the thing.

If you start out from the Visitor’s Center, you can make it to Mather Point on foot in just a few minutes.

Mather Point is a popular viewing point along the South Rim. It offers an expansive view of a quarter of the Grand Canyon.

From there, simply follow the trail. There are maps and factual placards scattered throughout, and a paved path that winds between trees that are just as interesting as the canyon itself.

The walking is the thing.

Eventually, after an hour of stopping every ten steps to snap a photo, we arrived at the Grand Canyon Village. The Village has shopping and food and rentals and views; basically everything you’d need to spend the night atop the canyon.

We went into the visitor’s center there to purchase the always necessary fridge magnet. The shopkeeper told us to catch a shuttle to Hopi Point to see the sunset, since that was one of the better places to catch it and there was no way we’d make it on foot.

So we finally took a shuttle. The one that leaves the Village at 5:05 skips all other points and takes riders directly to Hopi Point, just in time to see the sunset.

The sun slipped beneath the canyon so quickly it was almost hard to catch it.

And then, out came the stars.

Even the drive back to Vegas in the dark was like nothing I’d ever experienced before. Everything was blackness but the thin string of taillights lining the path back to our temporary home.